The Emergence of Letter Writing in Play: 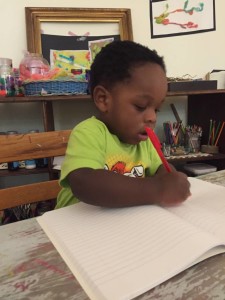 Behind each classroom door, learning moments fill the spaces with sounds, with buildings, with drawings, with conversations, with movements. When you step outside the classroom and pull back a degree, just far enough to see the school in its entirety, these learning moments become a part of something greater, something akin to a developmental timeline. The emergence of skills seems to blend across classroom borders, each age-group laying foundations that you can witness being built upon just down the hall.

Transitioning from my role as teacher in the two’s and three’s classroom toward working school-wide as the pedagogista has afforded me an entirely new perspective of the school, a holistic view of our learning community from which this development timeline has emerged. As a Reggio inspired school, we relish the belief that children have a “hundred” languages in which they express themselves, and therefore a “hundred” different progressions of the skills required to utilize these “languages.”

Perhaps the most traditional “language” of writing is a good place to start exploring the development of skills though a child’s early childhood journey. Below are actual snapshots from each classroom, all observed within a two-week span. When seen through the lenses of the fluid progression, they work to show the spontaneous, natural, and child initiated ways that language emerges in our play-based school of thought…

Within moments of entering the room, Adelynne walks toward me, hands held out in the offering of a book and an asking expression. Her eyes question, “Read with me?” We hunker down onto the floor and open the book. Her glances shift between the words emerging from my mouth and the pictures on the page. Excited fingers search the edge of the book, grasping and turning the page. We continue in this manner until the book is finished. She walks to the library corner, picks up another book and looks up again. 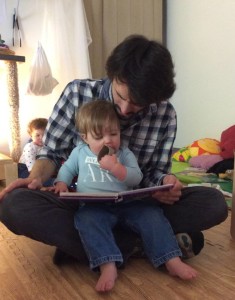 A small group in the atelier surrounds the light table, pouring and brushing within trays of sand. Royal walks away, toward the table with my open notebook and pen. He sits, picks up the pen, and begins to write. Long scribbles begin to cover my words on the page. With proper pencil grasp, Royal controls the pen and smaller and purposeful zigzags emerge. 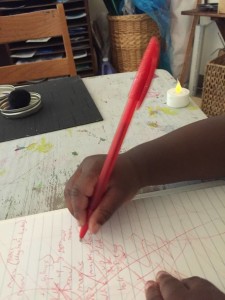 Children explore provocations in the atelier, some working with watercolors and pastels at the table. Mid-drawing, Holden requests,

I want to draw my name.

A great idea, Holden. What letter does your name start with?

I forget my letters. Can you help?

Of course! First is the letter “H”. 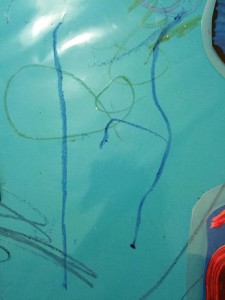 As the preschool classroom fills during morning drop off, I pull a basket of small blocks from the shelf and offer them to a group on the rug. “What can we make?” echoes from a few members of the group. I remain quiet and arrange three blocks before me into the letter “I.” Thais and August excitedly identify it, grab blocks from the basket, and begin working.   A moment later August, gets my attention, 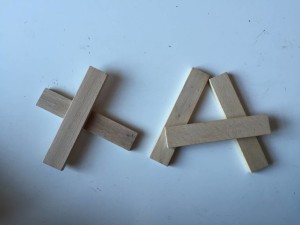 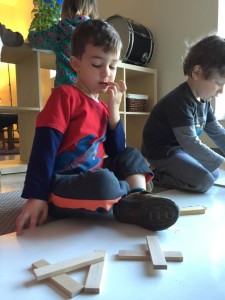 Later that day, as the children rest, I sit by August’s cot. With too much energy to sleep, I offer him a basket of the children’s names laminated and backed with colorful designs. He whispers an entire conversation before I can even respond,

Whose name is that?

For ten minutes he whispers to me as he searches for different letters in the other children’s names.

Harper sits at a table filled with small clay cubes, sticks, and a variety of tools. She quickly gets to work constructing three figures. Once finished she asks,

I want to write signs for my clay.

That’s a great idea! The paper and markers are on the shelf.

I want it to say ‘Tip crazy curious cat’ 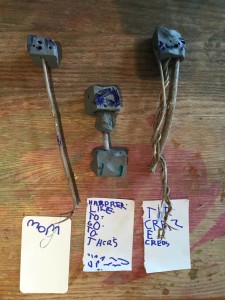 The progression of the anecdotes flows first from an emerging preference for books, which soon becomes an understanding that images and text has meaning. When this joins forces with increasingly controlled fine motor skills and representative drawing skills, the possibilities of letter writing emerges and the doors to the wonder of written communication are swung open. Through the open-ended and child initiated play, building, and art that we deeply value, the opportunity to learn the more formal foundations of writing dwells in these meaningful experiences.

After sharing so many amazing moments with the children of The Willow School, I want to leave you with a short poem inspired by their progression.

An infant arm stretches up

A book held out

Eyes inquiring to be read to

How soon it is that

The letter has a name

How soon it is that

A name is read aloud

Until it becomes a sentence

The sentence grows within the imagination

Only to bloom a hundred times more

Each petal sunning itself